In connection with rumours concerning redundancies at the Nairn Branch, Robert Sinclair, the Managing Director of the company and 5th generation family member to work in the firm,  told the Gurn that they had entered into the compulsory 90 day consultation period with their staff (a 90 day period is necessary if the future of more than 100 jobs is affected by potential redundancy – more on the UK government website here).  He said that trading conditions had been incredibly difficult recently and the company was looking at ways of making the business model more profitable. He stressed the company would continue trading and paying suppliers during this period.

He said that he was “devastated” by the situation. A major part of the problem according to Robert is the switch of consumers to online purchases and he said there is “no future without a website.”  It is hard not to have sympathy with Robert Sinclair and his company in these troubled, changing times for the retail trade. 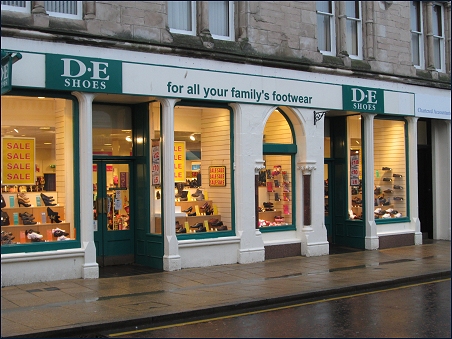 Nairn's one and only shoe shop now under threat.

Robert was quite frank in his conversation with the Gurn about the seriousness of the situation facing DE Shoes, his company is obviously trying very hard to ensure a future for as many of their stores and staff as possible. He said he was fairly optimistic that some offers to buy individual shops may come forward. Here at the Gurn we wish him well in his daunting task. The bleak New Year news that has been predicted for retail now seems to have come a lot closer to Nairn High Street. We mentioned in our conversation with Robert how Nairn’s only shoe shop was a key store on our High Street and to lose it would be a great loss. Robert made no promises at all but when asked he said that he would also be open to representations from the like of the business association and local elected representatives should they have anything to say.

The news is testament to changing times. Let’s hope however that DE Shoes can somehow maintain a presence on our High Street or that another company might be interested in continuing with the store. Whatever the fate of the DE store – challenging times lie ahead for retail outlets here in Nairn and all over the country.
Posted by Graisg at 5:30 PM

That'll be a shame if it closes. For as far as I can remember there's always been a DE in Nairn (it used to be across the road where the Funeral Directors is now). Pity for the staff as well.

Victims of the consumers choice on how and where they shop now Im afraid consumers prefer the retail parks or the 24he shopping on the internet that's just the way it is now.

High streets have had it,unfortunately.

A devastating blow for Nairn High Street - reminds me of the sad day when Woolworths went into liquidation. I hope there is a way to save our shoe shop but I remain unconvinced. With all these shops closing what can be the answer? Theres plenty of moaning about all the cafes we have- but I for one would rather see a street full of thriving cafes than empty shops :(

I find the news that DE shoes shop in Nairn is under threat of closure very saddening.

The shop looks really good, it's very well presented and brightens up that part of the High Street and I think they have made great efforts over the past couple of years to broaden their appeal with a good range of footwear from well recognised names.

Hopefully a solution can be found that will see such a first class shop continue to trade in Nairn.

and , to disagree with the previous post.... I don't think that High Streets have 'had it'.

Seemingly lost on those that think that online shopping is some kind of retail panacea is the fact that the internet never can be everything to everyone.

Personally I don't fancy ordering a pie in the post, or getting my bike serviced by sending it away to Cheltenham: God alone knows what I'd do for a haircut and how many pairs of shoes would I have to get delivered to find the pair that :-

Nairn has always suffered from folk that live feeling the gravitational pull of Inverness, from a retail perspective & the internet is simply the same.

All things considered though, I think that lots of Nairn folk like to shop in town & people from elsewhere in the region enjoy coming to Nairn for bit of a day out,a cuppa & a wander round the shops.

DE Shoes deserves support and the Association of Nairn Businesses will be discussing what can be done to help at the first opportunity .

But, just to return to 'High Streets having had it'

The High Street will still be with us in the future when out of town retail parks are nothing more than venues for car boot sales and boy racers.

"DE Shoes deserves support and the Association of Nairn Businesses will be discussing what can be done to help at the first opportunity ."

Maybe there are some practical steps we can take to help Robert Sinclair find a buyer for this shop (and others). Hopefully our elected representatives will contact him to offer their support. If a town of our size cannot support a shoe shop then the future for retail is very bleak indeed. Maybe this would be a good item for River CC to discuss on Wednesday night.

I remember when the DE shoe shop was in Leopold Street, i think where the bigger charity shop is now.. then the high street opposite where they are and then to where they are now, which they moved into when gud auld Rose Brothers were. There was also Rennie shoe shop where Tradeway is, and i think another shoe shop.

It will be a shame to see it go but as with most shops its a case of use them or loose them.

Wouldn't it be great if they did eventually close bearing in mind that is a big shop with big overheads! anyway wouldn't t be good it we saw a come back of a Rose Bros type shop on the same scale! I suppose it would resemble what Gordon McPhail is in Elgin South Street.

Anyone contemplaiting opening a shop has to remember all the overheads.. Rent, Electricity, Insurances, Rates, Wages, Telephone, Accountant Bills, Tax, VAT. etc etc.. then the cost of stock.. the profits don't go far to cover all those.. No wonder so many shops open and close in a short time, they really dont realise how much turnover they need to make the money for all the overheads..
I did not bad I lasted over 8 years with my shop in Forres.

What about those who now cannot afford to buy a new pair of shoes? For myself, and there is less money to go round now and on top of that I find difficulty in buying shoes, especially smarter ones for work, that do not hurt my feet and hate having to go and look for shoes because I know that I will never get the combination of fit, comfort and style I need. I will be sad to see the shop go and I rarely buy stuff through the web but I am just not able to spend much now.

Back in the good old days the 60 s we had lots of shoe shops and they all seemed to thrive, they even did repairs.
Clarks..Rennies..Brucies...Easifits...and DE.
In those days we didn't bother much with inverness,we had all we needed in Nairn. We had ...rose brothers ....heards ..and the butcher the baker and the candlestick maker.
But then not very one had a car or could afford to go to Inverness. Those days seem so laid back compared to today's hustle and bustle.

The High Street is not yet dead but with the collapse of so many shops within an area there is less attraction to shoppers to visit that area. The typical shopper will quite happily go to a supermarket where it is warm, well lit and have a range of what they're looking for, even if they do pay slightly more for it.

The supermarket has had a detrimental effect on the retail sector of that we can all agree, and now the internet is nibbling away at the dwindling High Streets around the country.

Blame can be placed at the feet of the suppliers who indescriminately supply to anyone as long as the buy in quantity. Thereby growing the garage retailer who stores the goods in their garage and sell on online at prices that anyone in retail who pays rent, rates, VAT, corporation tax, wages etc just can not compete with.

I know of many retailers who have tried to compete with the internet market and have just lost money to the point of bankruptcy. Later you find that the internet seller that they were competing against has gone because they bought a huge quantity of last seasons colours or left with 200xxxl shirts that nobody wants!

Blame can also be passed onto retailers that discount heavily online but not in their own shops thereby encouraging people to order online instead of face to face.

I frequently hear people asking for discounts in smaller private shops - the shops that are struggling. Yet they quite happily accept the £100+ bill from the supermarket each week.
Tesco, just for example produced net profit of £2.8bn on a turnover of £65bn this amounts to 5% of turnover not a great return for those in business but if you add in their acquisitions - companies, properties, land and other forms of reducing tax payment. Its still a lot of money.

At the end of the day it is the customer who decides and lets face it we all want everything for nothing.

So when you see a pair of shoes hanging in supermarket for £10 and they fit (roughly) you think - bargain, they'll do nicely. The fact that they generally only last 3months does'nt matter because you got a bargain! Thats how the majority of shoppers look at things. Not at the £40 they spent in the year on a pair of rubbish shoes made in a sweatshop in China or India. I've had a pair of Loakes for 6 years which are worn 3-4 days a week they cost £90 thats a third of the cost of the supermarkets\ cheap shoe retailers.

I am extremely sorry to hear about DE Shoes and as a retailer myself see this happening more and more as towns across the country build retail parks.

The future of towns will change significantly in the next 10-15yrs and there is very little we can do about it.

@anon 4:42, not 10-15 years, bit 1-3 years. A mixture of the recessions, online shopping and the out of town shopping malls, although the latter only has a limited life.