Nairn South meeting, the three Chairs listen and then respond to the Planners

The meeting on Wednesday night was very well attended with around 50 people inside the URC hall to listen to the Planning Department's Malcolm MacLeod and Brian MacKenzie. They listened and then they made their views known. 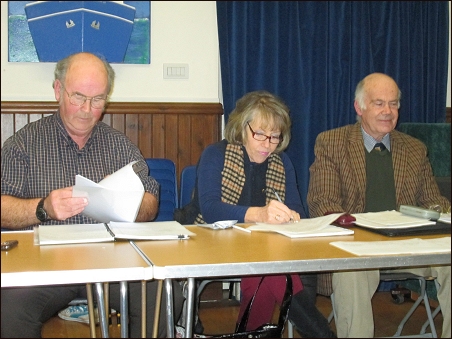 Tommy, Rosemary and Dick - the three chairs - at the coalface of local democracy in Nairn

Tonight we'll give you what the high heid yins from Glenurquhart Road had to say about it all and then tomorrow hopefully the unanimous reaction of the three chairs. After that plenty more to chose from and also debated on Wednesday night were an interesting set of proposals from Micheal Green. Maybe some of that if time permits. OK here we go, the wisdom of Malcolm MacLeod and Brian MacKenzie of the plannning department. First up was Malcom, the Development Planning Manager, he said:

"The reason we are here is to try and gauge the reaction of the three community councils to the proposals of the work that we have been doing at Nairn South. That work we’ve been over the last nine months but this actually goes back more than three years for the development interest in Nairn South. So what we are here tonight to talk about is the work that took place after the wide local development plan was approved. What that plan did in very simple terms,
was that it identified the area to the south of Nairn for long term expansion of Nairn. But one of the things that came out of that exercise was that the reporter, who is appointed by the Scottish Government, in fact there were two appointed. They said yeah, you know what, we agree with the principal of development in Nairn South but Council, you’ve got to go away and do a master planning exercise.

Now what that means is basically is we had to go away and look at, speak to the people involved and there are three parties involved at Nairn South. There are Gordons Sawmill, its existing use very important to economic development in Nairn and there are two land owning interests at Nairn South. So we were tasked by the reporter to go away, look at where there was consensus, where there was agreement on how development at Nairn South should take place and where there was disagreement – and where there was disagreement we were to come to a view through this master-planning exercise and hopefully allow some progress at Nairn South to happen, particularly in the short term. So what you’ve got here and I think you have circulated copies of it are the basic area outcomes of that work, the draft outcomes of that work

. It’s trying to pull together three different interests who agree on some things and maybe disagree on others. So we’ve been trying to pull together what we think is the best approach to developing this part of Nairn as well as building in checks. So building in points at which development will stop and no further development will be allowed until different infrastructure is provided.[..] We have a committee, the Planning Environment and Development Committee on Highland Council, this draft document went to that committee on the 16th of January. What we agreed was that we would come and speak to the Community Councils, we’d get your views, we’d really be interested for your views from the Community Councils and we’d take it back to the committee for final approval.

Brian Mackenzie, the Principal Planner, was next then gave some further background. He went into further detail talking quite a lot about Gordon Sawmills and possible future expansion. He indicated that development would start on the side and outlined what the developer contributions would be used for. He said : “As Malcolm said earlier , essentially what we want tonight is some sort of feedback from the Community Councils or anyone that is present. We’re hoping to get stuff together by the middle of February. If there are any points that you have identified already in the document you want to raise we’ll take those points now or if you just want to give us your comments […] but I would say that we would like comments gathered to go through the Community Councils and submitted to us by February the 15th.”

You have Tom & Dick in the photo, where is Harry ??