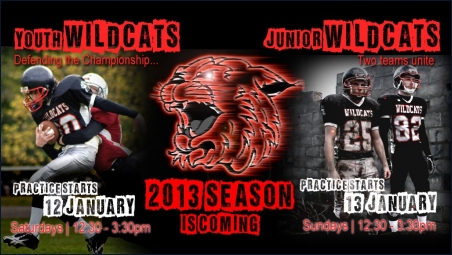 James Hudson is a former senior player for the Highland Wildcats and also one of the coaches for the youth side. He is one of team of people trying to expand the sport in this area, particulary the "Flag Football Group" which is a non-contact version of the game suitable for primary schools. He wrote to the Gurn with details:

"The Inverness Blitz was formed in 1999, starting off as a Flag Football group (a non-contact version of American Football) building into a well-established development programme in the Inverness area since 2006, when the development programme was launched. Same year that youth set-up was changed to 5 v 5 contact leagues in Britain, for 14-16 year olds. Wildcats have only had 1 season at junior football, 16-19 year olds, in 2008. We are attempting to relaunch the junior squad by combining the youth squads of 2011 & 2012 together. Between these two squads, they won 3 Scottish Championships and a UK Championship. With these two squads, we are also trying to recruit for our Rookie day on the 13th January.

I started playing in 2009, for a junior squad that was being set-up, as the season was about to start,
they joined up with the senior squad, 18+ years, playing the position Tight End transitioning to Wide Receiver, where I won Rookie of the Season at our annual awards night, the Blitz Awards. Right now, I will look to coach the junior squad, because of the situation with the senior squad. The last time the senior squad played was in 2011 as they were forced to fold in 2012 due to lack of players. Since then, the seniors are relocating to Elgin in an attempt to attract new players to the sport. Their 1st practice will be held on the 27th January, location to be confirmed, for more information about the Senior Highland Wildcats visit the page www.facebook.com/HighlandWildcatsElgin, where information will be released nearer the time.

One reason for the success of the youth squads has been cause of the successful development programme, headed up by Robbie Paulin. Here, starts teaching flag football to kids starting from primary 7, because the youngest group there is in British football for participation is 14 years old, he introduces the sport in PE classes and then progresses on by starting up after school classes. During the summer break, we then offer the chance for P7-S1 kids to try contact in the Blitz Development Contact Camps. I am currently one of Robbie’s sessional coaches helping him with introducing the sport throughout the Inverness area.

Right now, I am trying to set up a Flag Football group in the Nairn area, looking to start up in the 3 primary schools, Rosebank, Millbank & Auldearn, and also setting up a flag football squad at Nairn Academy, possibly for S1-S3. As well as that, I will look to recruit for the youth and junior squads.
Anyone that is interested in playing in any of the Highland Wildcats squad, or interested in volunteering, coaching, they can get in touch with me at james.r.hudson@hotmail.co.uk or 07784822976. They can also get in touch with info@invernessblitz.co.uk or 01463 242431 or on Facebook at www.facebook.com/highlandwildcats "