Dangerous chaotic scenes at Roadworks on A96 in Nairn tonight

The roadworks traffic lights facing east, just outside Bridgemill direct, past the river bridge were stuck at red at approximately 10.10 p.m this evening - there was a long queue stretching back towards Inverness and impatient drivers (lorries and cars) were pulling out to pass more obedient motorists and jumping the lights. Some of the exasperated law-brakers were travelling at some speed too and as they pulled out from various points in the waiting line the potential for an accident escalated. An eye-witness at the scene said the lights had been stuck at red for at least half an hour. This observer watched the lights for around 10 minutes and they still remained at red during that time. No one was working overnight at the roadworks but two BEAR Scotland employees, who had recently arrived themselves, were examining the equipment further along the road to try and determine the nature of the problem. The police then arrived on the scene. 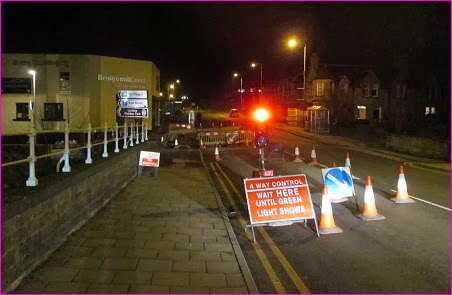 Scottish Gas Networks carrying out emergency works on the A96 Nairn at Lochloy Junction. It is hoped the works will be finished tomorrow.
— BEAR Scotland (@BEAR_Scotland) January 29, 2014

But the website roadworksscotland.org was telling a different story according to the information available online on their map the works will last until the 10th of February  - the Gurn has asked Bear Scotland for confirmation of the information below.

UPDATE:  0902 Cllr Colin MacAulay SNP states on his Facebook page: "Nairn A96 - BEAR reporting that they are awaiting an update from Scottish Gas re A96. If they have found the leak and repaired it then the trench will be filled and things will get back to normal asap. If not - then they will have to keep excavating until they do find it."

BEAR Scotland ‏@BEAR_Scotland  4m
@GurnNurn As SGN is investigating a gas leak, it can take up to 2 weeks. The traffic lights will now be manually controlled today.
Posted by Graisg at 10:31 PM

I applaud your devotion to keeping your blog readers updated on this wholly unacceptable situation. Have you offered your services to Traffic Scotland. It seems they are letting us all down and this could go on for some time. I just hope they do not suggest average speed cameras as their solution.

Monty Carlo Rally ici in Albert Street tonight -- drivers over 60 !! Why not!!

I drove up the high street at around 9:30pm and the lights were down then. it took 45 minutes to then get from the bus station to bridgemill direct. at that point there were people driving the wrong way down one way roads and driving at some speed as the frustration boiled over.

It is an emergency gas repair anon - why they didn't work on late is a good question though - perhaps there is a good explanation that will come out later though.

I'm sure no-one would disagree to the road being dug up to repair a gas leak, but the lack of good traffic management is what is aggravating the situation. All very well having someone manually controlling the lights but they're not going to be able to see very far in terms of how far traffic is backing up, more staff are needed for this

the nairn bypass was in full swing last night!
A big thanks to everyone bypassing via cawdor and balblair road totally ignoring the 40mph and 30mph village speed limits....
forgot the dualling, just give us a decent bypass.