Last night they stuck at red and tonight they were out completely. At around 10.40 p.m. tonight two police officers were directing traffic past the area where the road has been dug up and the two out of order sets of lights. The Gurn understands they had been there for around 15 minutes in response to a call they received. Contractors arrived on the scene shortly afterwards and began efforts to get the lights working again. 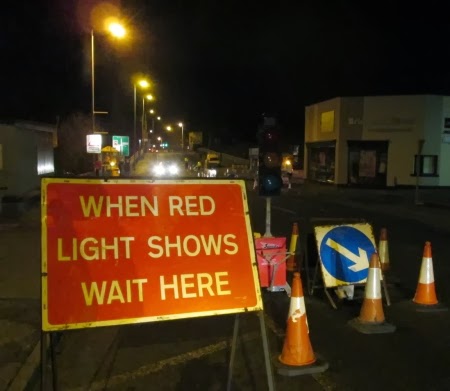 Hello, Hello - Police and contractors busy at the crime scene.

A classic example of the wonderful liberal country where companies and individuals inconvenience everyone yet there is no accountability and no responsibility taken for the total balls up that is made.

If the work was so important, it would have continued overnight.....

Given that today is the day that they are supposed to be remarking the Lochloy Junction, we could be in for total meltdown, perhaps even witnessing scenes reminiscent of Michael Douglas' character in 'Falling Down'

Are you sure about that Spurtle, there were a couple of other icons on a map somewhere or other recently but nothing else on the Traffic Scotland map to day - any digital trail out there please?

Does anyone know who we should complain to?

Crime? Interestingly Cllr Colin MacAulay is quoted on his facebook page "Report is that last night's traffic lights failure was down to vandalism"
Pretty bad craic if that is the case.