At the regular meeting of River Community Council in the URC hall last night a member of the public raised the possibility of moving Doctor Grigor’s statue from Viewfield back to the High Street. Cllr Liz MacDonald then told the 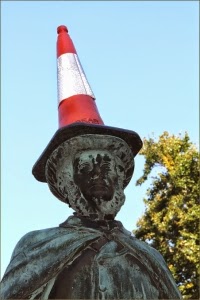 “We were actually talking about this on Monday, about moving the statue because in a couple of weeks at our ward business meeting we’re having someone through from the planning authority to see if we can take the proposals from the charrette forward and one of the things we were talking about was seeing if the statue could go into Castle Square – at the corner so it is at a prominent site and didn’t tie up the whole square so we could still have markets and things in there. So it is something we have discussed so it is nice to hear it being brought up at the community council.”

Picture shows the Doctor one September morning in 2012 in a more Duke of Wellington (George Square)  type of pose.
Posted by Graisg at 9:03 PM

Why keep transplanting poor old Doctor G? he has already been uprooted and moved once - from Leopold Street to Viewfield. Leave the guy in peace! If it's a good idea to have a statue in Castle Square, put up a new one. We could even have a competition like in Trafalgar Square to consider alternative options. Any suggestions?

On the other hand, I'm surprised that people aren't arguing for Castle Square to be turned into a car park, or to build affordable housing on it. Seems that is what the folk of Nairn normally want to do with any available open space.

Castle Square is perhaps the untidiest part of the High Street - it always looks as though it needs a good clean. Poor design?

so if he,s moved there,that means the proposed projected clock that saisbury,s paid for,but never got,will not now be shining onto the road.wonder who got the use of the money?certainly not the high street,does anyone know why the clock has never appeared?
narook.

I don't think Sainsbury's specifically paid for that Narook but I do believe it may have been that some of their cash would be used for such a project.

And how much will this cost and who will Pay? Leave him be!

Don't move him. That'll really mess up my Ingress portals.
:-(

i personally dont like the sound of the new location, if the doc has to be moved then why not on the small traffic island between leopold street and high street

While the councillor group may have discussed this, it was not a Charrette outcome. I can't see the point of moving it from where it is currently located. It's perfect where it is.
Given the cost of moving it, is this the best use of limited funds? If there is money to spend then spend it on improving the appearance of the High St. Should our Councillor's think they can use the Sainsbury's money for such a scheme then I have to say - think again! There are many more important things to be done than re-arranging the furniture.

They can find money to move this but cant find the funding for to build a disabled ramp at The Firhall Bridge. I think there needing to get there heads looked at as there money so badly needing spent in Nairn that people will put to better use.

Put him on the regal corner, it'll give the seagulls somewhere to sit.