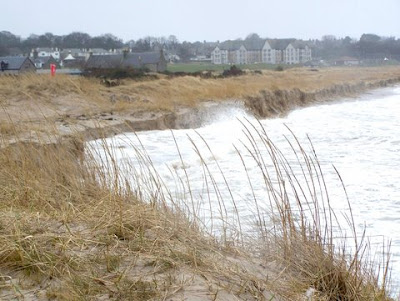 Jingle Bangle's picture of the high tide eating into the dunes on the 31st of March 2009. Can we expect even higher ones sooner rather than later?
Over the past three Wednesday evenings SNH ran a climate change panel in the Community Centre. Participants were asked to detail what features of the local environment were important to them, what changes they had personally seen taking place in the locality and what should be the priorities for preparing for climate change. Those taking part were told that the current predictions were for a 40cm sea rise by 2050 and the temperature increasing by 2.5C with dryer summers and wetter winters.
Much was discussed about all aspects of Nairnshire and how climate change would impact. Foremost in the minds of quite a few of those taking part was how we could defend the Fishertown and the seafront and the golf courses from the combined dangers of the sea rising and flooding from the river. It maybe that further action to prevent flooding might be a priority for Nairnites but just where would the funding come from? Would other bigger communities that were threatened with flooding be first in the queue? Of course, as mentioned above, climate change will present us with many difficulties and may come sooner rather than later. So just how do local people ensure that the authorities prepare effectively for that day? Or in the final analysis just how much can be achieved before you have to abandon some inhabited areas?
There was one suggestion that the debris that has built up in the river over the past few generations between the harbour and the railway bridge be removed to give more space to the larger volumes of water coming down in the spates and another that the Maggot should become part of the flood plain of the river again. How will the Nairn golf courses fare with rising sea levels, will there be any cash to protect them when priority will obviously be given to areas of habitation? There are tourism implications here too, will we get more tourists if we get warmer or will we lose them if the Golf courses go? Should we really be so occupied with trying to get a by-pass when perhaps an effective sea wall along the promenade might be needed sooner rather than later as we head into the next 10 to 20 years of this new millennium? Cash is scarce, the likes of Highland Council might have a climate change document out to consultation at the moment but where would the money come from to implement any recommendations?
The results of the climate change panel will eventually be fed back to those who took part, when we hear more we'll let you know.
Posted by Graisg at 8:35 PM

On the plus side , we won't have so far to walk when we want to go for a paddle in the sea.
I dont really subscribe to this scare mongering, I remember seeing the tide being that far in it reached the Maggot and the caravan site was flooded, also it often break over the prom by the links. Maybe the local cooncil will form a sub committee and spend thousands in plans which will never come to fruitition as per usual.

"Those taking part were told that the current predictions were for a 40cm sea rise by 2050 and the temperature increasing by 2.5C with dryer summers and wetter winters."
Our summers are definitely NOT becoming dryer! Whoever said this must eating magic mushrooms or living in Kent!
Extreme weather fluctuations have always happened throughout the globe and will continue to do so.

In Moray, the Spey is building up with gravel, forcing the river to erode the river bank by the only road to Kingston Upon Spey. Left unchecked, it will wash away the road and cut off the village.

It used to be easily solved - someone would drive a digger into the heart of the river, clear away the build up of gravel, and the salmon fishers would be happy.

But that was stopped a couple of decades ago and the site is a protected area - no diggers allowed.

Now no one's quite sure who is responsible for flood protection - Moray Council or the Crown who owns the land.

And the council think they'll need a £1 million computer study of the river to determine how to act.

Nairn can learn from Moray's mistakes - if something needs doing, such as the river or harbour need dredging, it needs doing sooner rather than later, to avoid idiotic bureaucracy.

On the plus side for Nairn, we were taught at school that north Scotland is still rebounding upwards after the last Ice Age.

Additionally, I've been told that there is a continual influx of sand into the Moray Firth that is making it shallower.

Perhaps the danger from the sea is not so great for Nairn at present - but definitely something to remain vigilant about.

Bring chilean drillers into park street, drill down to the Australian outback where they need the water. Divert the River down under, that might allow some black swans to come back up and join our ones. If they start now they could finish before 2050. job done! (:0)

They will need to be Rotary Drillers,or they won't get in.

I tend to agree with Brian here. Paying consultants large sums of money for 'studies' is potentially a waste. Simple pragmatic actions are needed but Councils seem incapable of making decisions unaided by consultancy reports and associated costs. Fishertown has been slightly below sea level for a very long time - fact of life. The river is so severely silted up now and that has exacerbated the flooding problem -An exercise to dredge the harbour and river (at least up to the A96 road bridge) would seem an obvious and low(ish) cost move. As far as the climate change brigade are concerned, I agree that the climate is changing and it always has and always will do - quickly and slowly, warmer and colder and there is little we can do about it. Of course King Canute thought he could control or influence things....how stupid does he look now!

The river originally ran parallel to the firth by flowing through what is now fishertown and the links with the mouth of the river being where the swimming pool now stands - hence the name Invernairn.

Dredging the river and harbour would have no effect in preventing fishertown flooding, unless you dredge the north sea as well. The silt and shingle problem has to be tackled at source upstream where banks are eroded etc.There are good natural reasons to be careful about putting diggers into rivers and disturbing the riverbed. The water level in the harbour will drop if you drop the riverbed outside, as happened on previous occasions. The boats need a minimum to stay upright and the harbour pilings limit how deep you can dredge the harbour basin. It is worth remembering that the harbour is part of the river not the other way round ! In the long term the maggot and golf course will probably have to be the flood plain.

The so called predictions are a on a par with the Roman soothsayer in Frankie Howerd's "Up Pompei" who said Woe, Woe and Thrice woe" and was always wrong.
Climate change of this magnitude and consequences is more likely to be bunkum than not but there is a whole industry of subsidy receivers out there and politicians who dare not say "we were deceived, we were wrong it is all unnecessary. Heroic efforts by the UK people, at great cost, to reduce their carbon emissions will have virtually no effect on a world scale and the cost in taxes and other subsidies will be great. We should be very suspicious of these inflicted costs.It is ironic that one Nuclear Power station on the Moray Firth would generate enough electricity for the region available 365 days per year. For some reason unsightly, costly and very inefficient (27% availabilty) windmills and the pylon line through Beauly are more welcome than nuclear power. It appears that you can fool many of the people most of the time!