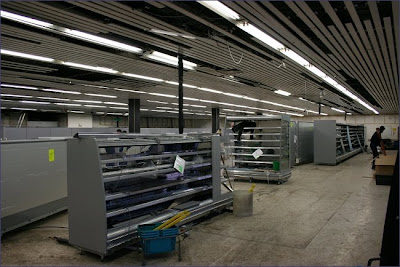 Email ThisBlogThis!Share to TwitterShare to FacebookShare to Pinterest
Labels: Co-Op

Where was this taken?

Noticed the painters outside the building this morning was tempted to ask do they do homers as there is a building next door badly needing a lick, on a different subject a wee birdie told me there is to be no festive festival on the high street this year I thought i would have been a great opportunity to officially launch the new pavements but going by the photos in an earlier blog if it rains bring your wellies as there could be a lot of puddles.

Hi James, through the main door about 08.00 this morning.

That would be a shame Divi, I thought we were to get a slimmed down cheery sing song to turn on the lights this year.

Me thinks Graisg would be ideally
suited to play one of The Wise Men
in any of the nativity plays over the festive season, also as you mentioned its going to be a slimmed down cheery sing song would you recommend i go on a diet
from today.

perhaps a good old sing song organised by ourselves is just what's needed this year for the switch on of the Christmas lights. Get our local young and old musicians to provide some rousing festive cheer.

Yet another example of the Co-op not giving a damn. Somerfields/Co-op currently closed due to refurbishment so you would think that High Street Co-op would be picking up the slack? You would have thought they would have brought in extra supplies to cope with the demand. Not a chance! No bread or rolls on the shelves, hardly any fruit/veg. There were only two people working the tills, the rest were putting non-essential stuff on shelves. I’m not slagging off the staff in the shop, they are trying to cope as best they can and they are being run off their feet trying to cope. Couldn’t they have put some of the Somerfield staff into the Co-op to help out? After all they all work for the same company, don’t they?