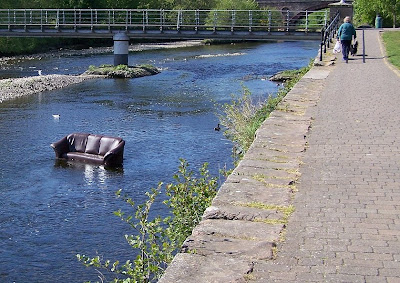 The Gurn made its name by its fearless reporting of this menace back in 2005. As a community we were lured into a false sense of security, we should have maintained a permanent 24 hour sofa watch once the immediate meanace had been dealt with. For Nairn it is now Sofa 2 time. We must act and act quickly. Sandy please get moving before the wider world finds out about this menace, the picture shows both an unsuspecting local going about her business and a duck in the river oblivious to the danger. Now we know why Joe's ducklings are vanishing at such a rapid rate this season.

The Gurn and its sister cyber-organ, the Gurn on Sunday will not rest until our town is finally free of this menace. Keeka Boo thank you for forwarding this picture to the Gurn and doing your civic duty in alerting the population.

Maybe it's the first consignment of furniture arrived for the new flats across the bridge.

Joe doesn't do ducklings, according to him it's duck chicks!

On occasion i have intentionally used the words "duck chicks" rather than "ducklings", so there can be no ambiguity.

You may notice that ducklings in supermarkets refer to fully grown birds !
The word Chicks are universally understood.

Maybe the gurn should condemn the river polluters rather than make fun out of it ?

Ducklings, duck chicks? All taste the same to me!

so do we now have a dose of some kind of new PC and signets are now swan chicks?

Not many of us go into supermarkets hunting for ducks, ducklings, or duck chicks anyway so what is the problem with calling ducklings just that?

They want to get the human shit sorted first.

I think we will see the rest of the lounge furnishing following on later....

I love that picture!!