Stuck in the middle with… 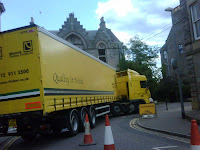 As shopkeepers on the Brae struggle with the streetscaping work, traffic on the High Street ground to a halt this afternoon when a lorry became stuck trying to negotiate the now reduced junction at the top of the Brae/High Street. A near permanent skip coned off to one side of the street and a contractors van parked on the other side of the lorry resulted in grid lock whilst the lorry driver went to see if he could find the owner of the van.
Remember this is just the first stage of the Brae streetscaping; part two will start in the autumn. I’m sure it will all be worth it in the end?
Posted by Nairn at 2:27 PM

20 minutes ago a huge lorry with a load of sand was parked over the pavement outside the Indian Restaurant at the Brae end of the High Street, it looked as though it was waiting to reverse down the brae like a lot of large vehicles are doing at the moment.
Irights big Yellow lorry would have had a lot of trouble with that too.
Couldn't deliveries of building materials be made very early on in the mornign to avoid problems?

Pity the person doesn't have anything better to do than comment on a lorry load of sand being delivered. If he/she doesn't know how roadworks are done they should leave silly comments alone. If deliveries were done in the morning and dumped in the work area no-one would be able to move. Silly comments from an ameteur.

From the speed work appears to be progressing it doesn't look like anybody's moving much anyway!