Welcome to Nairn - a new look for the Regal? 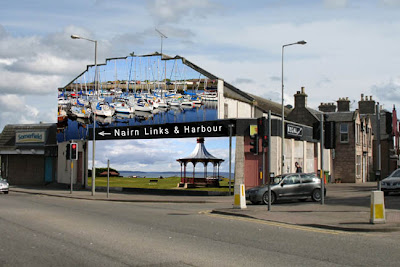 Could the Regal get a massive make-over in the near future? The above picture is of a potential transformation that Visit Nairn members would like to see happen to the dilapidated gateway to the town. Danny Alexander is fixing up a meeting for Visit Nairn with the Co-op and hopefully some positive action will ensue in the near future. Highland Council have been trying to get some movement on town centre issues with both the Co-op and Somerfield but as yet have nothing to show for their efforts. Hopefully the Visit Nairn initiative will bear fruit.
Posted by Graisg at 10:22 PM

Wow, I like it. What a great idea to move the links and the harbour to the high street!

What a fab idea and the perfect pics to promote nairn, there are 1000's of cars passing by there each day and it puts the message out to passers by that Nairn really is the place to visit

It might as well point to an out of town development for Sainsbury. Oh and don't stop there, carry on to Forres.

how about advertising hoardings promoting Forres, Elgin, and Inverness.

After all, that is where most of the traffic passing Nairn is going

It's a brilliant idea and used elsewhere where tourists are regarded as important as well.

For example, I was in Camden a fortnight ago, and some may have seen on the news that (last year?) a major section of buildings along Camden Road had burned down. Rather than leave a blackened facade in a major tourist area of London, the burned out shell of the building is now hidden behind a series of large images promoting Camden.

In case it looks like no one would fund such images on the derelict buildings of Nairn, it's worth considering setting aside some space in at least one of the images for an advertising logo - ie, 20% of the space to the right on the lower image. That way, you could attract commercial interest to pay for the images - Nairn gets a makeover, paid for with private money. I'd certainly be interested in finding out more if it could go ahead.

The question is whether planning would be required, and if so, whether something could be agreed reasonably quickly, in order to ensure advertiser interest is maintained.

That is, of course, presuming the HC and VisitScotland would not be interested in funding the idea, or able to get something up reasonably soon.

Definitely something to explore, I think.

Danger is it would hide the reality and we would have advertising hoarding or the such like up for decades.
At least whilst the empty buildings are staring us in the face everyday there is a chance something will happen sooner rather than later
Will anything influence the powers that be to stop Nairn being the wasteland of the North
No one seems able to decide anything, what projects are on going in Nairn - streetscaping the Brae, thats it folks
We need real development of the town, not posters hiding the fact that it's in a real mess

Nairn doesn't have a row of burnt out buildings as in Camden but a scattering of disused properties.
I suspect with the value of property in London their hoardings really will be a temporary measure, but if we put something similar up in Nairn they are likely to be there for years, probably becoming eyesores in their own right.
We need radical positive action for our town, not a bucket of paint to hide things whilst we pontificate what to do for the next 10/25/50 years as we have for the past decade or so

I agree - ideally the issue of the buildings being demolished or renovated should be addressed.

However, by all accounts, there have been efforts made in this area, which has come to nothing.

If there's a choice of the buildings remaining an eyesore for a few more years, or putting up a cover of some sorts, then the latter seems a second best we can at least have addressed in reasonable time - in theory.

There's no money so dream on.

But what could we have on the hoardings, lets see

'Behind these hoardings there was once a real town'

'Nairn, the town they tried to sweep under the carpet'

Lets face it, Nairn's empty buildings are going to be here for years yet, and there will more to come.
Nothing was done when there wasn't a recession, not much chance now for a good few years.
Small matter of the community centre debt to clear first!
So if people think rose tinted specs will make it all better go for it