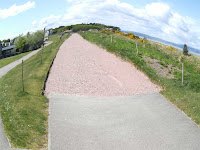 Days, weeks, and months later the work to widen the bankie footpath still carries the ‘in progress’ status. When the Gurn jested that the work might not be finished in time for Easter little did we know that the project plan was going to be stretched into the summer.
So what does this huge feat of engineering require? Namely a JCB to scrape off the old surface and to widen the path, lorries to take away the old material, lorries to bring new surface materials, and a small roller to harden the new surface.
What should be a very quick, straightforward job seems to have slowed to a pace suggesting that Thomas Telford is back in town and we’re building the new Caledonian Canal.
Visitors to the bankie path are advised to buy all terrain buggies for their bairns, wear stout boots, and any cyclists should be aware of potential punctures, for rather than complete a small section at a time to minimise disruption, it would seem that the council is determined to progress the work as one long job, and at the moment the path is mainly compacted hardcore rather than a smooth surface.
Why is this work being carried out anyway? Was there gridlock on the path at busy times, folk bumping into each other, multiple buggy crashes, I doubt it. Maybe it is Highland Council getting ready for the huge influx of residents as it rubber-stamps every planning application that a developer wants to present.
Perhaps it will all be over by Christmas?
Posted by Nairn at 9:06 AM

Email ThisBlogThis!Share to TwitterShare to FacebookShare to Pinterest
Labels: Bankie

But the time being taken just makes the project look unmanaged. It would be nice if the HC insisted on sensible deadlines for project completion.

This is yet another example of local government waste and mismanagement.
Onthe radio this morning i heard a retired local government manager state that 50% of ALL government expenditure could be saved by proper use of taxpayers money!
He was told to keep quiet by those who run the system!

The previous path merely needed another 2 or 3 inches of added surface tarmac laid level. Thats all.
If you wanted to make a time scale comparison,then going back to roman times would be much more accurate.
To besmirch the name of Thomas Telford one of Scotlands and the worlds finest engineers is most inappropriate, for in his day there were no roads worth talking about, no Jcb's, lorries, or any of the labour saving machinery we have today.

The path will no doubt be ready just in time for the showies lorries to demolish it !

My mention of Mr Telford, a Scottish engineer of unparalleled skill was not to mock or besmirch but to compare the time scale of the upgrade of the bankie footpath with that of building the whole of the Caledonian Canal, a complex feat that took several years, and no-doubt has a certain council been in charge we would still be waiting for one of the Brahan Sear’s prophesy to hold true!
The new ‘motorway’ size path will aid the progress of a few impatient cyclists but beyond that it just seems a total waste of resources. I’m sure the citizens of Nairn would have preferred the road crew to have been out filling the numerous pot holes which our roads suffer from?

other waste of money folks our money for that i could think of better ways of using it. HC what more can you say. not sure were they get these ideas from unless the path has been upgraded for the horse and cart? thats idea we could do pony rides along the seafront brill wake up HC DO SOME THINKING BEFORE YOU JUMP IN

Not being funny, and no offence right, but if this is the worst thing you can think of, that pisses you off in your life right now, then you are very, very lucky, and you should definately be laughing. Don't knock it. Enjoy.

Did hear it was a shortcut to Sandown.But that's it stuffed now,until the next time.

its not just me thats on about this waste of money pookie but a lot of other folk. each time the HC do something like this they make a mess of it you might be happy to pay for it but i am not. the money could be better used.