After discussion of River Community Councils riverside regeneration project between the sewage and A96 bridges in the Community Centre last night (Tuesday) Tommy Hogg stated:
“Our main problem a the moment is the fact that the place is alive with rats.[…] It’s actually the fact that the birds are getting fed off the bridge and all the feed is lying and the rats are just crawling all over the place.
Joe Telfer, sitting in the audience, was quick to intervene. ”No, no, no Tommy! I’ve been looking after the wildlife down there for nine years now.”
”Nine years?” said Tommy.
“Nine years, that’s right,” continued Joe.”I’ve been feeding them in a controlled way for the last five or six years The swans and the ducks.”
“And what about the rats?” Remarked the Chair?
“The rats,” exclaimed Joe” That sewage pipe that you’ve just had fixed was left open for about two weeks and I’ll tell you now to prove my point.” Joe then showed a picture of a sewer outfall with a gap which he said he had seen rats using..”There’s rats all over the river said Joe.
”This thesis was shared by Sandra Dunbar who remarked that the riverside was their natural habitat.
“I knew that meeting would bring this up,” said Joe in a fashion that seemed to indicate to this observer that he felt he was being unfairly treated.
Tommy replied that he was quite entitled to bring the matter up. The Gurn understands that this is the case with members of the public complaining to Tommy about the infestation.
“Anything I feed them is all used by the swans and the ducks.” Said Joe.
“Well do you make sure they clean everything on their plate?” Asked Sandra Dunbar to the amusement of those fifty or so citizens present. A brief exchange then took place between Sandra and Joe. Tommy tried to move the meeting onto the next business but some still continued.
Murd Dunbar was of the opinion that an infestation had to be dealt with whether the rats were being fed or not.
Joe had more to say: “It’s not moving with rats, there’s one family of 3 to 4 rats there. 2 adults and 2 young that I know of and I am down there feeding them twice a day. Not the rats I might add.”

Liz indicated that the Council did have a duty to deal with rats and stated that she would ask the environmental health department to investigate. This prompted Sandra to state that she had been told by the Council in the past that a rat problem in area could not be dealt with until a rat was inside a property. To this Liz again stated that there obviously was a duty to be involved. 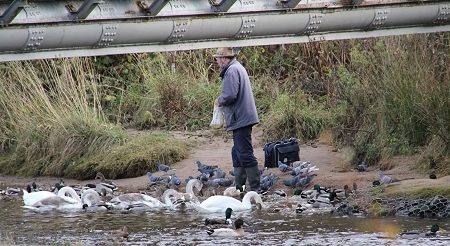 Joe Telfer feeding birds in the area in question

Can I suggest your viewers have a quick look at my blog posting which kinda proves my point this morning, they might find this mornings video interesting.
http://www.simplysuperbswans.blogspot.co.uk/

tail from the riverbank said...

As far as I know Joe Telfer tries to feed everything that flies barring that which he sees as predators, namely hoodie crows and seagulls, but it's inevitable that some of his bi-daily feeds are not all consumed by the birds and are left by the riverside.
This unfortunately must provide food for less welcome creatures like the rats. Joe is after all feeding the birds small items like corn and breadcrumbs and not whole salmon.
The pickings are probably at their best for the rodents when Joe feeds at the top of the tide and food items which sink missed by the birds becomes exposed as the waters recede
In our gardens we can use feeders or bird tables to stop food going onto the ground and being available to rats, but short of Joe ceasing to feed along the river I cannot see a solution, and there is no way Joe will stop feeding 'his' birds
Rat traps might be suggested but this is going to require council investment and they're not always successful.
Maybe we just have to accept that the feeding of the river birds means we have to also enjoy our rodent friends who have an equal right to the food as much as anyone else!

The granite rocks at the west pier are infested with rats, sitting at the harbour in the car they are quite apparent.

To me it sounds like you are trying to use joe as a scapegoat.Even going by the photo of him feeding the birds i find it very unlikely that one tiny bit of bread or grain would be left for the rats.
Rats and river's go together nairn river is no different to any other river.
Does no one find it strange that there has been so so much raw sewage in the same area in the past which will have rats there in a flash.
Infestaion seems to be the wrong word to use for three or four rats on one small area ?.For a man to buy the bird food from his own pocket most of the time earns my respect.
As for people who just want to point the finger at one man because rat are on the river i fine funny.I never won the lotto at the weekend can you bring that up at the next meeting ? see what you can do to help me maybe ? sounds as crazy to blame one guy for feeding the birds.Shall we stop the holiday makers feeding them too.??

Kill the seagulls? Now it's kill the rats, is that the only answer that we can come up with? Are they really a problem or is this just the usual hysteria setting in? Why not stop feeding anything in that area for a while and see what happens?
With regards to how much money and time someone claims to have invested in feeding birds - that is their own choice, no one makes or forces them to do it. Lots of people feed wildlife but don't feel the need to self promote the fact that they are doing so.

Is that a rat I can see behind Joe's bag?