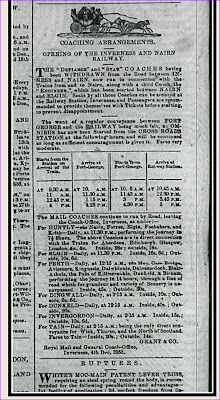 Mrs Gurnmeister was complaining that her train from Aberdeen was an hour late earlier this week. A sobering thought however for anyone worried about delays on the local line, to think that in the days when the railway only extended as far as Nairn from Inverness that you would need another seven and a half hours on the Stagecoach to even reach Huntly! At least the transport system was integrated, there must have been unity among the Community Councils of the time.
Thanks to Irene for another snippet from her extensive research.