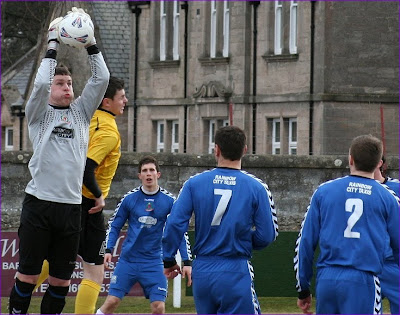 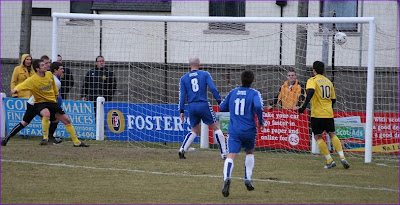 Pictures will enlarge. The second image shows Tony Low's goal going into the net. Nairn never lived up to the promise (perhaps even dare we say flashes of genius) of the first half and Cove stepped forward to claim their three points to stay at the top of the league. More pictures later perhaps and a link to a full match report once it appears on HighlandLeague.net.
Pictures now on Gurnflickrn
Read Kenny MacLeod's match report here.
Posted by Graisg at 5:55 PM

75-76, I think if I was NCFC I would be hiding that flag not flying it

remember'66, why would Nairn hide the flag? There are many teams in the league that dont have such a thing so we fly it with pride.

The third goal (a peanalty) seemed to be the turning point. County did well against the champions, a team that have had more match practice recently.
Ok It's not everyone's idea of a dream season so far but there's a long way to go yet.

"why would Nairn hide the flag? "

Fly it with pride then, but most of the players weren't even born when the league was last won. Do we really need reminding of that?

But there's an easy way round yesterday's score line

Q. Did you go to the match yesterday?

A. Aye, Nairn one

A. Aye (mutters Cove 5 under breath)

Don't panic keep the faith. We still have a football club. Les Fridge has the full backing of the board, anyone that wants to replace him will have to come up with a business plan to take over the club. Anyone fancy going back to jumble sales?
Let's just live with it and see how the rest of the season pans out.
The flag is all about the future as well as the past and present. Jocky MacKinnon knew that, perhaps we should all try and do more for the club like he did.