Will Streetscape 2 solve this problem - Part 2 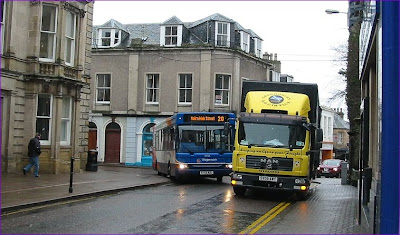 A lorry parks just up from the brae, perhaps the loading bay on the brae itself was full? The bus driver coming along Gordon Street does his best with the remaining road surface available but still mounts the pavement as he enters the High Street. Will anything be shaved off the wide pavement here to allow buses and other large vehicles to get round the bend safely when this situation occurs? Picture will enlarge.

Aye, the Gurn photo just underlines as to how the Brae street scape wasn't thought out properly, lorries with goods for folk on the Brae often park at that spot

Still, on the bright side this post has been up several hours now and no one has suggested pedestrianising the High Street!

Could it be that the clear message from High Street residents and those in Waverley Road has trickled through?

It might be a good idea, and a gesture with some practical effect, to email these and other similar pics to Richard Harland (richard.harland@highland.gov.uk) and his team of planners in Highland Council, who were responsible for devising the streetscape proposals.

Thanks for the suggestion anon, will do that later today.

ref anon's comment above … I think the name of the Director of Planning is HARTLAND with a "T". Might be important for the email address!

Mr Hartland is not the Director of Planning. I understand that is a Mr Stuart Black, not to be confused with a councillor of the same name. Mr Hartland is listed as the Head of Planning and Building Standards.

I'll just send it to one of our councillors to forward to the appropriate high heid yin.