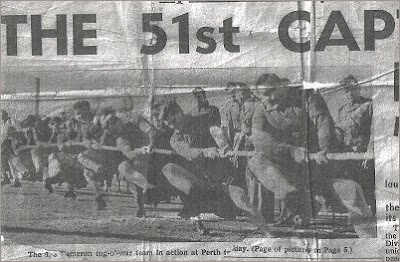 From our correspondent Murd: "The 51st Battalion Queens own Cameron Highlanders T.A Don Company Nairn.
Tug-O-War October 1963 Perth. There was 23 other teams competing for the trophy on the day. The final pull Cameron's V Gordon's which was a very hard pull but victory was ours Don Company Nairn.
I would like you to take note or our pulling position at the time of the photo was taken. The opposition was heard at one time to say when we hade one leg of the ground that was our weak point but I can assure that movement was very fast. I do wonder if the memory to this day is still with others and how many of us are still around Nairn team only two of us Nairn lads left." 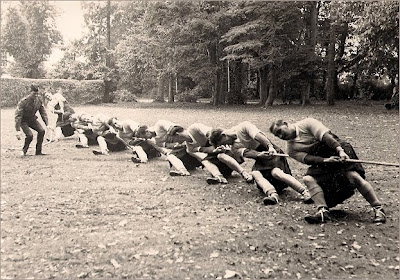 "This where we did all our traning the team in the photo. Front of the rope Jok Willox---Ally BAIN-----Davie Gray---Murd Dunbar------Hector MacKenzie----Comrie MacKenzie ????any one out there know----Do Mackintosh and the Coach Jimmy Shewan."