This in from one of the correspondents at our Fishertown bureau:


Some Fishertown residents received a surprise visit yesterday when council workmen chapped on their doors asking them to move their cars, as they were about to start resurfacing work on the roads. It was the first that the they’ heard about the work. Vehicles were duly moved and work began with a road crew from Inverness. The roads in question were scrapped clean and then a layer of tarmac and chippings were laid

Many residents moved their cars this morning expecting the work to be finished today but the only vehicle they saw was a road sweeper collecting the loose chippings. The driver confirmed that the work was now finished

One local rang the roads department and was told that as Scottish Water still had outstanding work in the area all they were getting was a ‘top dressing’ on the roads, no finish with tarmac. The same council person said that the roads department no longer issued warning about such work as bad weather often delayed the start of such operations leaving residents confused as to when the work was taking place

The roads that have been resurfaced are parts of Firth Place, Park St, Union St and Society St 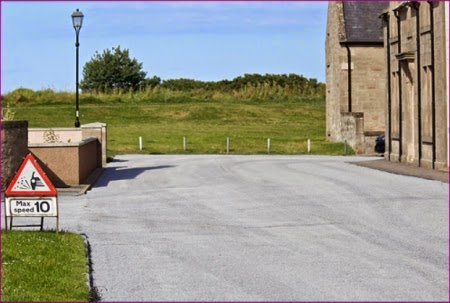 I fail to see any logic as to why the council chose the roads that they did, and as I can't find anything on their website I assume that as has been suggested this is it for now?

As the new surface is now a very light grey I assume that road markings will not be put back?

If this is truly how Highland Council are leaving it then they've not done the residents any favours, and walking my dog this morning I can confirm that the tar is still very sticky in places

This is no different to any other rural Road surfacing work done these days, it's terrible to cycle on as well for weeks after,