Murd Gurns about the state of the riverside paths

Murd Dunbar has written to Highland Council about the state of some of the Riverside paths including the walk up from Firhall to Cawdor and the path down from Mill Road to the Brooman's Well area. He received a quick response from the official concerned and also from Cllr Colin MacAulay promising to rectify the situation. See below an image from Murd from as far as he could get up the Cawdor path from Firhall. Murd has told the Council that the paths have only been cut once this year and he believes the path is now starting to resemble an assault course. 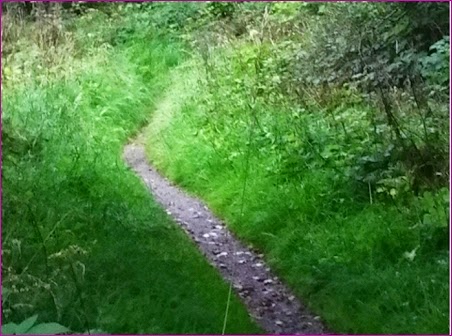 looks like a jungle but who is king of it? very sad too see it in this state. so much for being a tourist town. and even for the local townsfolk. such a nice walk if it was looked after and some care and pride put in too the upkeep of it. we could promote it more. so well done to murd for highlighting this problem.

I jog this route from cawdor side and after about 10 mins its thick and overgrown with some big nettles, its not been cut this year as far as I can see.

The path shown was reinstated about 4years ago to D.D.A standards 1.500m to allow access for wheelchairs and mothers with prams but now reduced to less than 500mm.
{Is this part of there tactic so we want need a ramp at the Firhall Bridge??}

On the subject of Grammar. As a Nairnite who now lives abroad (England) I have been accused of pedantry many times, by friends and colleagues. I now know it must be a Nairn thing:)