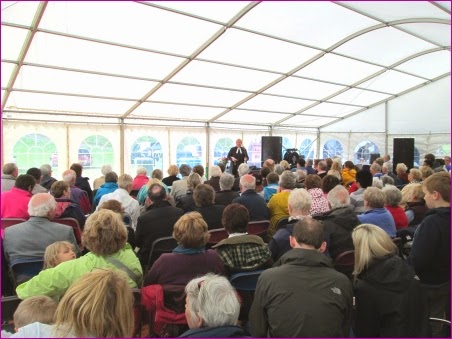 The open air service planned for 11.00 a.m. down at the Links moved into the beer tent. The Rev Steve was his usual self, moments of comedy and serious anecdotes to make us think deeply about ourselves and our relations with others, particulary at those stormy moments in life.

One moment Steve Manders will be telling you that he does a £5, £10 or a £100 service and what would you like? He says he usually counts the collection before deciding. Then he will tell you a wee story like the time he worked in a hostel for men seriously ill and dying from HIV/aids. They had two attitudes, half of them thought they deserved it and the others that they were merely human beings experiencing suffering. He said that there was one auld wifie that would regularly bring sweets and tablet. He asked her one day why she came, a family conection perhaps? She simply  said that they were all some mother's son.

A remarkable, inspiring moment or two from the Rev Steve then and you don't need to be particularly religious to appreciate his craic too - what he has to say can apply to our lives whether we are believers or not. A reminder that the Games are not all about drams and chat, an opportunity to take a moment or two for reflection on more serious matters that effect us and the community  - the good and the bad, the stormy and the calm, the way many lives are.

Now it's music until 5.30 p.m. The giant kites are out and there's a chance to shake off that sore head and have another bit of a blether. "Pain in the rain or fun in the sun - it'll be a mixture of both today. 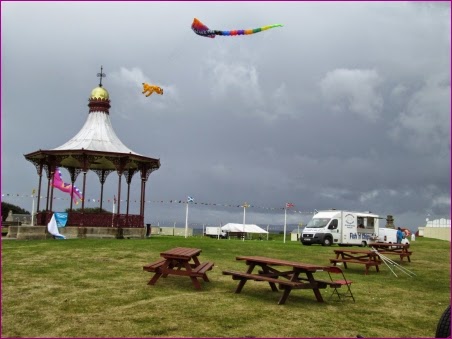 Hope everyone had a spiritual pint for the bar collection

It used to be the demon drink and now a pub is a place of worship. Changed days in Nairn

It would have been outdoors anon but it was just too wet, once the service started the sun came out though

Give in an hour or two and if you're hungry you'll probably get a food bargain at the links, don't think there's too many punters for all the vans that they've got there. Washout Sunday I'm afriad

Always look on the bright side anon, still 4 and half hours to go and this observer going back down for a pint soon - won't need a burger either.

Amazing really, bars and hotels in Nairn sit empty and yet when someone puts up a tent as one it's stowed out even on a Sunday

Fantastic idea to have the beer tent on Saturday and Sunday, I really enjoyed my visits on both days and hope this is a regular feature !

What do other pubs offer on Games day? The exact same as any other day! So of course something that is only there 2 days of the year will do well for 2days of the year! The other establishment's in Nairn have the other 363days. Well done all involved! Plus I am sure you can now tender for the beer tent so anyone can make an offer to the council to Pay the dues and take the risk! I will add it was ran by the classroom I think? and when I walked past the classroom at the weekend it was still busy!

Enjoyed it very much too - same again in 2015 please and a bit of sunshine too if possible.

No luck with the weather this year, but it is certainly worth persisting with this for the future. It definitely has the potential to catch on and become part of the Games weekend experience.

Dunno why they took the beer tent down. Seemed like an excellent new venue to me that would do well all the year round. Plenty of dog walkers and tourists around the links.

I miss the Marine which was handy for a wee refreshment