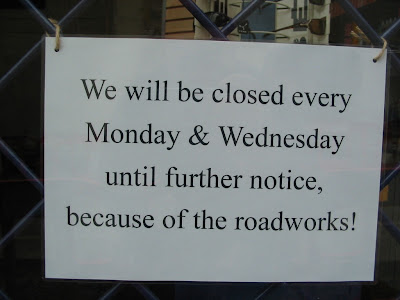 New hours for Ross Outdoors Ltd on the Brae.

An advert placed in today's Nairnshire Telegraph by Highland Council on the subject of the Brae streetscape works states 'Shoppers welcome, business as usual'. Yellow council signs at the bottom and top of the Brae also carry similar messages.
Surely if a business is being so badly effected by the work at the Brae that it is not worth opening two days a week, something needs to be done urgently to research the impact of the works. Failing to do so might well see the new streetscaping finished but a number of the shops presently open closed through loss of business.

lots of tourists walking around the the brae and high street on sunday with only ashers to go into! why not try opening for a while on sunday's and see what happens. the tourists would like it i'm sure

I know it's an easy to make a throw away comment like 'why not try opening on Sunday' but perhaps those eager to encourage seven day a week opening should consider that the people that run the shops need a day off occasionally. Some of them might even have families that they may like to spend a little time with (if they ever found the time to conceive them in the first place).

I happened to be in the High Street on Sunday afternoon ,and I thought the visitors, and locals alike, seemed quite content - sitting having a blether and an ice cream in the sunshine.

May just be my personal philosophy but I think that there are a lot of people who appreciate the gentle , more relaxed practice of Sunday closing, for some types of businesses anyway. Perhaps this is contrary to modern thinking but, in that respect alone, I would hope it survives as a local practice.

Of course, there will be those that label such ideas as Luddite and outdated but I don't care. My feelings have no religious grounds at all - I just like the way that Sunday punctuates the week. It gives it a shape; something to look forward too, for those that work the rest of the week.

As long as the tourists can buy an ice cream, a post card and a bucket and spade, I think you'll find them a fairly contented bunch, particularly if the sun happens to shine too. I don't think that offering them the chance to buy shoes, a 46” flat screen TV, or a nice cardigan would make them any happier. After all, like everywhere else in the UK, these things are available 24/7 in Inverness, and the last time I was there , the people certainly didn't look any happier.

Perhaps one of Nairn's strengths for the future is that it isn't, in real terms, too far removed from its Victorian past. Now viewed as an idyllic period in the town’s history, there are lot of people seeking such peaceful and gentle lifestyle experiences, for holidays , or an everyday basis. Perfectly understandable of course, given that the model society has chosen to adopted over the past few years certainly seems to have fallen on its ar*e at the moment.

Walking down the High Street this morning (Wednesday) I was worried about how quiet the whole street was. Surely this works must be affecting all High Street businesses.

I assume the buisness's affected will enjoy a rates rebate for the disruption - as enjoyed by Inverness retailers due to the streetscape works...?

What about it Councillors....?

Most, if not all, of the shops on the Brae,or similarly situated businesses anywhere else in Scotland, won't actually be paying rates this year.

At last, a decent idea out of Holyrood :)

Will take your word for it anon, but a link for confirmation would have been good.

Maybe that's how some can afford to shut Monday and Wednesday.?

I'm def with Anonymous on this one. I mean, what the hell? Like I've said B4 to anyone who can be arsed to listen. Nairn ain't disneyland Paris, Texas - but watch out, because there are sinister plans a-foot to theme park us all! Look on the bright side, what's the worse that can happen? Is your glass half full or half empty? Etc...