Is Nairn harbour polluted or not? 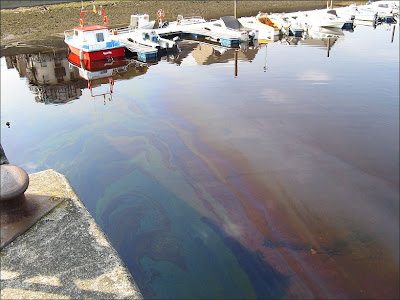 Local man Joe Telfer is still concerned about the state of Nairn Harbour after the recent pollution incident clean-up. He is calling for detergent to be used on what remains of the pollution and has written to SEPA to that effect. The Gurn has received permission to publish an e-mail sent by Tony Usher, Highland Council’s General Manager of harbours, to SEPA in response to Joe’s demand. The e-mail describes the current state of events as perceived by Highland Council and also gives some background detail that Nairnites may find interesting. The picture is from Joe Telfer. As the Gurn has mentioned before, a little diesel can look like a lot, can such amounts as seen in the picture be harmful to wildlife? Here is Tony Usher's e-mail to Keith Beaton of SEPA.

'I am led to believe that the incident led to a spill of light gas oil, a full and appropriate response from the Harbour Master and the Roads department contained and removed the recoverable oil.

Many thanks to them for their efforts.

I am advised that although cleared, a light sheen reappears on the surface intermittently; this sheen is only a few microns thick and is too thin to be absorbed or effectively contained. The accepted practice in these cases is to allow the sheen to disperse naturally and biodegrade.

The use of dispersants within the 12 mile limit is banned, unless authorised by SEPA, this is because the chemicals are more harmful to wildlife than the oil, particularly in the case of light gas oil.

I am not aware that any wildlife has been poisoned.

If you wish to authorise the use of these chemicals we shall certainly apply them. However I recommend that the most environmentally responsible way is to let the sheen disperse naturally.

In accordance with our policies, the polluter has been advised that they will be invoiced for the cost of the clean up.

The Gurnmeister imagines that the cost of the clean-up will not come cheap and will be an incentive to others to take greater care. It remains to be seen now if SEPA will demand furher action from the Highland Council. If the Gurn hears more we will post the news.

Update 17.34: 'SEPA at this time do not consider that the use of dispersants is appropriate and could prove more harmful to the wildlife present.' SEPA have also spoken with Harbourmaster Alex Taylor who will be undertaking further investigation tomorrow and if further clean up is necessary it will be undertaken. SEPA were also unaware of the incident until informed by Joe Telfer.

@ alorange, will discuss your post with the editiorial team. We have already disallowed one comment that you would consider very pro 'mad duck brigade'. It may be that we will simply close the thread to comments as a cycle of counter comments may just get us all nowhere.
Perhaps simply best for us all to work together for the wildlife, the harbour and the users and the town as a whole.

The Gurn editorial team is always happy to receive your comments, but in this instance we are closing this thread.
Nairnites and visitors alike enjoy both the wildlife and the boats at the harbour, but accidents can happen as has been reported.
The Gurn will keep you informed of any updates.