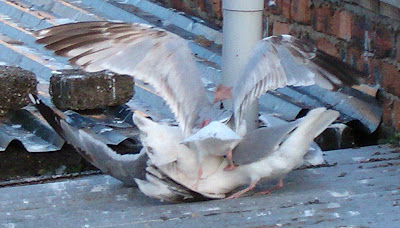 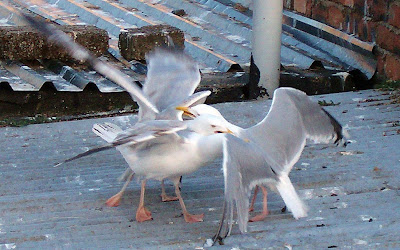 Following on from Murd's picture we have another image from Joe that shows how our feathered neighbours will work together to attack intruders. Joe says:

Proving that gulls have a lot of strength in those beaks and necks, can work together, and will fight to retain their territory.'
Posted by Graisg at 6:41 AM

Email ThisBlogThis!Share to TwitterShare to FacebookShare to Pinterest
Labels: Seagulls

I have an excellent recipie given to me by my dear old mucker, Mrs Balfour Beeton. Surely in these financially strapped times, it would be good to put these errant birdies to some good use? Recipie as follows:
Seagull A Trois.....Cooking for three
by Mrs. Balfour Beeton.

"We were delivered a brace of these splendid shore-loving avians one day last winter, bagged by my personal trainer on her estate that very morning. Admittedly up until then, my only experience of the common gull at anything above room temperature had been when a flock of Terns was sucked into the jet engine on my chum Leo’s Lear. Obviously the instant immolation of beaks, feathers, giblets and feet didn’t lend itself to the subtlest of aromas, but I think the nascent chef in me sensed a possibility.
1. Take seagull. Hack off head, feet, wings and tail.
2. Burn feathers off with blowtorch.
3. Drop in cauldron and boil until cooked.
4. Serve with relish of choice, pickled cabbage or shortbread will “see ye right”.
BB"

how about if i started a wee seagull control business and pricked the eggs on your roof so that the gulls will still nest but no chicks will be born (like succesfully done at Nairn academy) and charge you £25 for the pleasure (danger money)!

Pricked? Eggs? Do you mean 'pickled eggs', or what?
Look it's only Friday and I'm already getting hot under me collar!? XX

Sorry Seagulls r us but that will not stop them S....ing on my car, on my washing on my roof, blocking the gutter.
It will just make them stay longer.
I wonder if the baking soda in the bread roll really works?

Try some on yourself,then you will know.

Seagulls? Ha! What are they good for? Absolutely nothing, say it again! Respect due, Frankie goes to Hollywood, a truer word has never been said. All they do, is
poop and make nice seasidey noises for the holidaymakers. What's that? The same could be said of me? How dare you! You'll be hearing from my solicitor...!
(Or rather, my old man's solicitor). Winged vermin, worse than pidgins. Yes ok, I may do bog all, but at least I am not a holidaymaker, I am a taxpayer, or at least my old man is, (unless his accountant can sort it). I demand Action! Why should
I have to wash all my designer clobber, and my kids top notch Boden outfits over and over again, just because some half-wit bird decides to do it's 'business' all over my washing? I am a bizniss woman myself, and there is nothing I couldn't tell you about step-aerobics that you couldn't write on the back of a postage stamp. Wake up sleepy old Nairn!These socalled 'seabirds', are just taking advantage of us seaside-town dwelling homeowners, especially those with an already distinctly fragile mental grasp on life...