Extra, extra read all about it 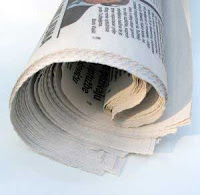 Paul Carr is not the first and won’t be the last to comment on the newspaper industry, the Gurn this week commented on falling sales of Scottish newspapers. In his article Mr Carr makes some sound observations on the whole industry along with survival guides for those who will listen.
At the Gurn we hope you are entertained enough to enjoy a little of what we write and that you come back now and again to visit. We are not a replacement for a newspaper for we recognise that a blog is just that, a blog.
Keep supporting our news media, despite its shortcomings the likes of the BBC is still a respected news organisation in many parts of the world, freedom of the press is a freedom that we need to maintain.
Posted by Nairn at 8:19 PM

Just on the way to buy the Courier :-)

Here's a great comment from Danny Sullivan (the most established journalist in the search engine world) countering newspaper criticism of Google:
http://daggle.com/090406-225638.html

I hope newspapers continue in one shape or form, their demise in terms of circulation and advertising has been happening for years, it is not a new phenomenon.
Subtle cuts have been made at editorial level meaning that journalists are almost encouraged not to leave their buildings, which is why we often see the cut and paste culture. News comes in on the wire or via press releases, this material is then read (Sometimes) and becomes an instant article. Pounding the streets, notebook in hand is a historical notion of the journalist, and yet this rather than google searches will produce real unique news which would be any newspaper’s strength.
Google sometimes gets it in the neck for the likes of the Associated Press as Paul Carr’s article suggests, but it leads potential readers to news sites. The content of such sites will then dictate whether or not a reader returns another time without a Google lead.
Newspapers have seen many changes over the years and have survived thus far, but they are now perhaps facing their biggest challenge and need to adapt quickly.
Giving your journalists a good pair of shoes, an expenses allowance, and a notebook will do far more for your paper’s content than letting them browse the Internet for news. Google is a tool for readers and should not be where a story starts!