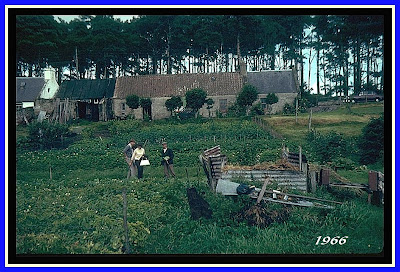 More on Pig Street from Hamish:
'Many of the cottage occupants reared pigs until they were ready for market

My grandmother raised pigs in her garden until not long before war broke out in 1939. At one time she had an arrangement with Altonburn School; Altondon and Edenvale to collect pig swill. The latter were, and may still be, two fairly large family residences in Pig Street. Altonburn was then a boys prep school and so she had a good supply of swill from there. She had a pony and cart for that purpose and I think she had one or two other collection points too. John Ross the butcher who had a shop at the bottom of the Brae bought most, if not all, of her pigs. Having sold her produce she bought two piglets and went back to 'square one'

The attached is a photo of her cottage and garden as it was when England won the World Cup. Two modern bungalows now occupy the site.'
Hamish
Posted by Graisg at 6:50 AM