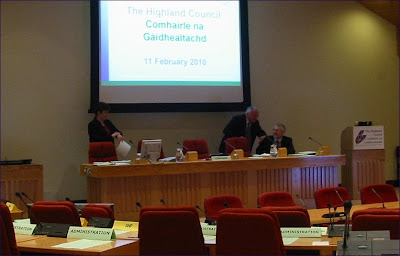 Convenor Sandy Park prepares to take his seat
Councillor Alston made the opening speech explaining the administration’s rationale for the cuts. Fine and noble words about sharing the burden of having to bail out the banks and how they had to get it right for the future because if it was left to 2013 it would be an unholy mess. It was all quite laudable until he started a rant against the Scottish Government, accusing them of taking decision making powers away, after that he just sounded like a typical petty politician scoring points.

He was followed by the convenors of the committees and then John Finnie the official leader of the opposition spoke. He was brief saying he would leave much of the debate to the amendments his group would be tabling. He indicated that he saw the budget as an attack on front line services.

The amendments were proposed but all defeated, there was some considerable debate but the votes came out around the 50-19 mark each time. The Lib-Lab-Indy ruling group held their nerve and went through with it - 12 million pounds will be cut from the budget. They will come back in the Autumn to decide on more cuts. History and their constituents will be their judges.

Email ThisBlogThis!Share to TwitterShare to FacebookShare to Pinterest
Labels: Cuts