Snow business - you can clean outside your shop/business and not be liable. 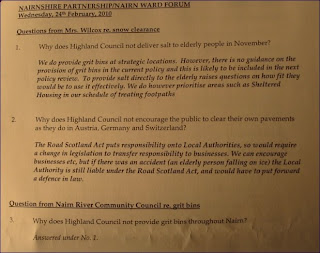 Click on the picture to read the written answers from the Highland Council to snow related questions asked of them for last night's meeting. Liz told the world that there was no liability on anyone cleaning outside their premises - the local authority was liable.

Sandy Park told the meeting that he'd had an e-mail from Cllr Rosemary Young in New York. She had told him here all shops and businesses are legally responsible for cleaning snow and litter outside their premises and Sandy was keen to see if anything could be done to possibly enforce the same in the Highlands. Might be a good idea Sandy especially for fag-ends as well as snow.

Jeanne Tolmie wanted to know why Ardersier had so many gritting bins compared to Nairn. Apparently this was due to 'historical' reasons. There is going to be a review of snow clearing procedures and gritting bins would be part of that but when we look back to what Liz told the River Community Council recently it is entirely clear that the Council's main mannie in this department ,Mr Neil Gillies, is not very keen on more grit bins. Now could one be forgiven that this is typical of all Highland Council 'reviews', being about what officials want and not what communities desire? If Nairn wants more grit bins then that should be nothing to do with anyone in Inverness. If Ardersier have more bins than Nairn than good for them but will they have to be dragged down to the lowest common denominator rather than Nairn being upgraded to Ardersier's grit box capacity? Is this what Highland Communities must now expect from the Council.

Email ThisBlogThis!Share to TwitterShare to FacebookShare to Pinterest
Labels: snow

As mentioned in this article there is a common theme here. Be it the police or local authorities the emphasis always seems to be what they want to do or what they think they should do in order to score points and/or gain favour from the 'powers that be'. Very rarely (if ever) is the primary consideration the poor souls who pay their wages, the very people they are supposed to be representing - the general public. Time for real change...

so good he went there twice said...

Does this mean that our intrepid 'Sandy the main man' will have to stop feasting on free Brussel sprouts and head off on a fact finding mission to the snow free sidewalks of New York?

I think we should be told!

I would hesitate to categorise the local police with the council. I've been most impressed by Inspector MacLennan and his officers in their efforts to engage with folk in Nairn, especially young people. More about this later.

My ranting was directed far, far higher up the tree than Police Inspector level. The front line are usually trying to do a good job in spite of senior management political motivation.

"My ranting was directed far, far higher up the tree than Police Inspector level"

Sandy is doing his best Anon :)