Still 'a walk in the park' for Danny? 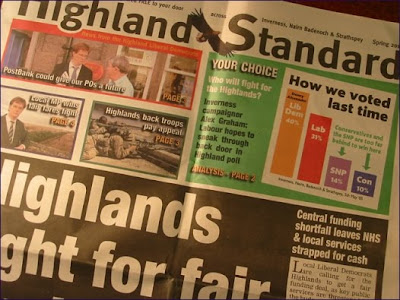 It should just be plain sailing for Danny Alexander when the general election comes. He has a reputation as a hard-working MP and he comes out of the expenses scandal whiter than white. So one would think that he'd get a second term. As the stats on the propaganda freesheet that came through Nairn doorsteps last week show, the Labour party were in second place last time and the Liberals are warning us that they might sneak it if we don't go and vote for Danny. Well over previous general elections the vote in this constituency has been pretty fluid and I remember a pundit saying a few years ago that it was 'a four-way marginal', I think that was the time when Labour took the seat with Dave Stewart.

Are there any dark clouds on the horizon for Danny at all? Perhaps one, the Liberals are the majority group on Highland Council, a council that is hardly universally proper and will soon be making deep and severe cuts to the services they deliver. Will those upset with the cuts and the performance in general of the council punish Danny for the actions of the Liberal councillors? The same might happen to the Labour Candidate too. Does this give the SNP's John Finnie any chance at all or is the real fight here for second place?

bring back something said...

Well it's not going to be a walk along the Nairn bypass for Danny and the Lib Dems anytime soon, thats one thing for sure

Not giving back any expenses said...

It depends if Danny can survive the Blueberry Muffin expenses scandal
It was after all our money that bought him that muffin and I'm not sure if his partner has forgiven him for going with that kind of food
There will always be the suspicion on her part that a wrapper will drop out of his coat pocket, or he'll forget to wipe away last nights crumbs thus exposing himself to another snacking vice

And then there is his call for us all to pay a substantial higher rate of Council Tax, not a vote winning policy for some

And has the election funding of £2,500 by a Labour Peer (so called friend) really and truly been swept under the carpet

Best of a bad bunch or a clear nice guy winner?

Also,no sign of Danny's wee local
helpers,this time.Maybe they are all a wee bit Muffined off.Or maybe they
already have enough on their plates.